The two lead guitarists, George Harrison of the Beatles and Eric Clapton of the Cream, were best friends in the 1960s and collaborated. When John Lennon failed to do a slick guitar solo on Beatles’ ”While my guitar gently weeps” 1968 on The White Album, George got Eric to do it, which he did perfectly. As always.

But the two friends and muscians came to share more than just music. George Harrison had met a stunning model in London, Pattie Boyd in the mid-60s, and married her, after asking the Beatles manager Brian Epstein if it was ok.

They married in 1966. Harrison late wrote ”Something” for her, a song on Beatles’  Abbey Road album, their best ever.

But Pattie Boyd felt lonely as a housewife while George Harrison was busy with the Beatles and his solo career and started hanging out with Eric Clapton. At a garden party in 1970, Eric said to George in front of Pattie:  I am in love with your wife!

Eric Clapton wrote the hit ”Layla” the same year for his friend’s wife. The song was a based on an old Arabic and Persian 5th century love story, Layla and Majnun. A poet’s mad obsession by a beautiful  woman, Layla. Lord Byron called it the Romeo and Juliet of the East. Clapton’s introductory riff became famous and the triangluar love story continued.

Pattie Boyd was torn between the two famous musicians in the 70s, but made a decision in 1977 to leave George Harrison for Eric Clapton. He had written a second song for her that very year, ”You look wonderful tonight”. They married in 1979 but divorced in 1989.

The two men were still friends. In 2001 George Harrison died of cancer after being almost stabbed to death in 1999.  At the tribute concert later for George Harrison,  Eric Clapton played ”While my guitar gently weeps”. You can hear in his guitar solos how he misses his friend and rival. 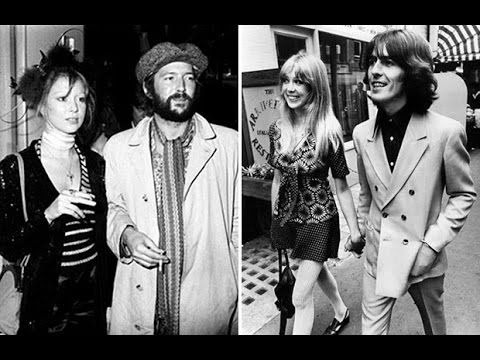